When you talk about mining to most people, the image of house-size earth moving equipment and gigantic craters, or long dark tunnels have generally what come to mind.

However, a new mining industry has been evolving since 2009, and it involves what is called cryptocurrency. Perhaps you have heard about Bitcoin. But in reality, Bitcoin, along with other popular cryptocurrencies, (Litecoin, Ethereum, Zcash, Dash, Ripple, and Monero) are not hard currency at all; they exist only in cyberspace.

But, how these currencies exist is becoming more important than the existence of the currencies themselves. What do you know about distributive ledger or blockchain technology?

To explain the process, we start with the mining of cryptocurrencies which requires a dedicated and fairly powerful computer with specialized processors, a reliable power source, an internet connection (2 megabits per second or faster), and a cooling system to dissipate the substantial heat that is generated. Depending on the cryptocurrency, establishing mining operation can cost a minimum of between $5,000 and $10,000, and requires many hours of constant study.

The mining process itself involves computing the answers to intensely complicated algorithmic equations. Once an equation is solved and a coin mined, that coin is registered with a number and placed into a password-protected electronic coin wallet.

Notice that I said the wallet is password protected. Unlike the passwords that you set up for access to the internet, bank account, or computer programs, these passwords consist of a long string of numbers and letters that are randomly generated when the wallet is initiated. A typical password may look like this: 34fe9f09e27cc9057e03d29e5ebde996be2869ac1a412e9188f023165df39e74.

The wallet holder cannot change the password and must keep it in a very safe place because, without it, the cryptocurrency is impossible to access, and the passwords cannot be recovered. Without that password, the wallet and its valuable contents are lost forever.

Each crypto wallet is tracked through a series of connected computers called a node, each with a matching ledger system referred to as distributed ledger technology. Hundreds of node computers are located around the world with matching ledgers.

Every cryptocoin transaction is recorded in a block on the ledger sheet that identifies the product sold and the cryptocoins used. Every subsequent transaction generates a new block which is verified against the previous block in what becomes a Blockchain. It is because of these individual node computers, each with their matching ledgers, that it becomes impossible for someone to hack into the system to steal information.

These ledgers keep track of every cryptocurrency transaction that has ever taken place and processes the information through what is called “Distributive Consensus” whereby each node on the network mathematically verifies that the transaction is accurate and has not be modified.

During a transaction, the network receives three pieces of information. The purchaser’s digital wallet address, the amount of currency to be spent, and the recipient’s digital wallet address. The blockchain computers verify that the person sending the currency is the actual owner of the account and that the funds are available. Once a consensus of the ledgers is verified, the transaction is completed, and each of the ledgers is updated to transfer the cryptocoins from one wallet to the next.

The advantages of cryptocurrency are numerous, including the fact that Cryptocurrency is completely decentralized. No single person or institution controls the network. Its structure, money supply, and transaction record cannot be manipulated by any bank, government, organization, or rogue bad actor. Also:

While the distributed ledger technology and blockchain verification system is the backbone of the cryptocurrency world, it is also finding its way into other industries.

For instance, in the real estate sector, the demand for international property is up 334% since 2009. But since there are no international real estate standards, rampant fraud and bureaucratic red tape make it almost impossible for Americans to buy property overseas.

Propy, a global property store, and decentralized title registry is using blockchain to become a safe and secure global property solution. On Sept. 24, 2017, the purchase of an apartment in Kiev by TechCrunch founder Michael Arrington using Propymade history—it’s the first real estate purchase with cryptocurrency, and the first real estate transfer on the blockchain.

Propy uses the nearly impenetrable Ethereum blockchain to record the proof of ownership and is the most secure real estate system to adopt worldwide to standardize the industry. Blockchain simplifies a complicated buying process that ordinarily takes months, into a simple online transaction—opening the international market to American investors and allowing hundreds of billions of foreign dollars to flow into the American residential sector.

In the same way, real estate transactions are recorded and held secure, healthcare providers are looking at a blockchain-enabled health information exchange that would alleviate security concerns related to data-sharing between different providers. A patient would be able to access and share their data from the blockchain, and each provider would be able to update relevant information with an individual key.

In the world of finance, a financial technology company called Populous is using blockchain technology and digital tokens as a secure, transparent, and modern solution for businesses to get immediate funding for international financial transactions including bank loans and invoice factoring.

The transparency of transactions recorded via Blockchain is a major enabler of faster payments and improved financing across international borders. It reduces risks such as currency exchange fluctuations and fraud and lowers cost. Populous created a Blockchain-based Smart contract platform to autonomously perform all necessary functions connected with funding, releasing payments, and the distribution of recorded data. This technology eliminates manual error and the need for any services from third parties. Of course, local onsite verifications are still necessary.

Since the time when man first bartered for goods and then developed a currency system, the business of doing business has constantly evolved. Businesses need to keep up with current technologies in order to grow. 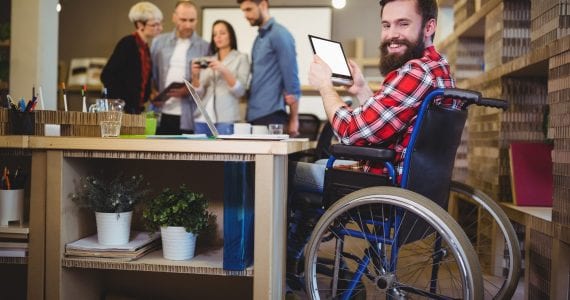 Jason Guinasso 19 Apr 2019 7 comments
By Jason Guinasso, Special to bizNEVADA Over the last year, our firm has fielded a number of questions from employers regarding what their obligation to provide “reasonable accommodations” to individuals…